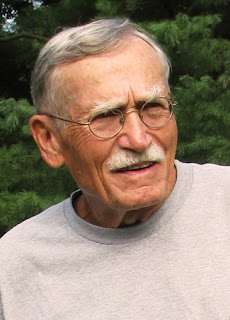 One of Peter Meinke’s most popular books from the University of Tampa Press is The Shape of Poetry, his “practical guide to writing and reading poems.”  Now we are delighted to know that poetry in Florida is in great shape and good hands, since Peter has been appointed as Florida’s Poet Laureate.

Peter has been poet laureate for the City of St. Petersburg since 2009. This month Florida Governor Rick Scott named him to a four-year term as official Poet Laureate for the State of Florida. He becomes only the fourth Poet Laureate in the state’s history, stepping into a position officially established by the Florida Legislature in 2014. The state’s previous laureates were Franklin N. Wood, appointed by Gov. John W. Martin in 1929; Vivian Laramore Rader, appointed by Gov. Doyle E. Carlton in 1931; and Edmund Skellings, appointed by Gov. Robert Graham in 1980.

Peter is Professor Emeritus at Eckerd College, where he directed the creative writing program for nearly 30 years.  He has published eighteen books and chapbooks, including eight volumes of poetry in the Pitt Poetry series, and he has three books in print from the University of Tampa Press: Lines from Neuchatel, The Shape of Poetry, and Truth and Affection, all of them with drawings by Jeanne Meinke, his wife. This summer the press is working on its fourth Meinke book, The Elf Poem, another collaboration with drawings by Jeanne. It is an introduction to poetry for young people (and children of all ages), containing, as its subtitle states, “Less Than 10 Not Very Golden Rules for Children Who Like to Write Poetry.”

Congratulations to Peter (and Jeanne)—and watch for The Elf this fall from UT Press!

I like this article, makes me think about a lot of things. But one thing I like is opening my horizons, I become more intelligent. Greetings from the organizers pameran buku ikapi in Jakarta