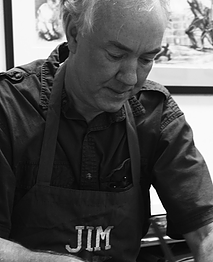 After a twenty-six year tenure at Truman State University in Kirksville, Missouri, as Professor of Fine Arts directing the Printmaking program, Jim Jereb is now one of the curators of art at The Brinton Museum, located in Big Horn, Wyoming, and will head the Printmaking section of the museum’s new Art Education Center.

With his many years of printing experience, we’re happy to share with you Jim’s comments about a book he describes as, “A charming story with strong connections and relevance to the current society.” 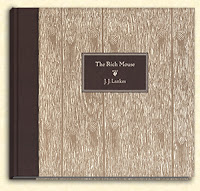 • The proportions of the book fit comfortably in the hand and present the story and illustrations for easy reading and viewing.

• The cover design is well integrated with the illustrations, using the texture of woodcut as a motif.

• The layout of the text blocks and illustrations (margins, pagination, gutters) enhances the reading experience.

• The selection of the J. J. Lankes woodcut illustrations complements the story and treats the reader to an enchanting visual and literary experience.

• Technically speaking, the illustrations and text are inked and printed with great skill.  The darks have rich solids yet maintain crisp, clean edges and definition.

• The paper that the book is printed upon is wonderful, with a slight texture that feels good under my fingers.  There is no ‘read-through’ or other technical distractions.

• The colophon is informative and concise.

• The binding gives the reader a sturdy, well-constructed object, with excellent ‘lay flat’ opening.  This makes for ease of handling while reading.”

On The Rich Mouse Compendium . . . 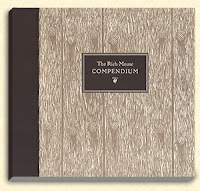 This book pairs with The Rich Mouse in proportions so that both nestle in the slipcase. This quality storage makes both books immediately accessible for cross-referencing.”

The chronology of J. J. Lankes gives a solid historical listing. This, coupled with the photographs of the artist through the years and the images of the manuscript stages invites the reader to become acquainted with the author. Further, the details of the origin of the Village Type Face and Lankes’s involvement in printing and the book arts give great insight into the creative process that is required to bring an idea into completed form. The photographs of the actual wood blocks were of great interest to me, allowing me to study the marks and carving style that produces the illustrations.

Posted by Tampa Review & Tampa Press at 11:46 AM No comments:


Matt Sumpter of New York City has won the fourth Anita Claire Scharf Award given by the editors of Tampa Review. His new poetry manuscript, Public Land, will be published in 2017 by the University of Tampa Press.
The Anita Claire Scharf Award is given to support publication of a book of poetry submitted to the annual Tampa Review Prize for Poetry competition that speaks to the journal’s mission to celebrate the beauty and diversity of the natural world and to illuminate the interconnectedness of our global environment. The award is named in honor of Anita Scharf, the founding editorial assistant, and later associate and contributing editor, of Tampa Review who helped define the aesthetic and global values that are part of the journal’s mission.
“Matt Sumpter’s poems are gritty, often bleak, and intensely aware of the troubled relations between humans and the natural world,“ the judges wrote. “In fact, this book is an eloquent private and public act, intensely personal experience turned to poetry that constitutes a public call to face the dangerous implications of many of our current individual and social practices.”
Sumpter’s poems have appeared in The New Yorker, The New Republic, Best New Poets 2014, Ninth Letter, 32 Poems, and Boulevard, and a group of five poems won the Crab Orchard Review Special Issues Feature Award. His fiction is forthcoming in Glimmer Train, and he is the Lead Narrative Designer for the adventure/fitness app, MarchQuest. His scholarship on writing pedagogy appeared in the March 2016 issue of College English.
From 2008-2010, Sumpter worked on trail crews and conservation projects in Montana, Oregon, Illinois, and Missouri. He helped build and dig trail, fell invasive tree species, and suppress wildfires. Living in tents for weeks at a time, he became well acquainted with the difficulties and blessings of outdoor work: shoving his feet into wet socks on snowy mornings, drinking water sanitized with iodine, having his “office view” be overlooks in national forests. If it had paid a sustainable wage, he says he would still be doing it today. But the experiences helped inform and shape his prize-winning collection.
“I am fascinated by the ways people interact with place: how our environments make possible surprising, troubling, and triumphant new ways of being ourselves,” Sumpter says. “How do public spaces transform our private lives? How can place help us reckon with darkness and loss? Do any of these things bring us closer to understanding the nature of place—or people?”
He pursued these questions at The Ohio State University, where he received his MFA, and continues to consider them at Binghamton University, where he will receive his PhD this fall.
“The more I explored the topic as a writer, the more I realized I had been exploring this topic my whole life, ” Sumpter says. “After elementary school, I would climb a tree next to my bus stop and listen to the pine needles.”
A lifetime of natural curiosity sustained Sumpter through the long process of assembling Public Land. He reports that over the past seven years, he has written, revised, and re-ordered the poems more times than Microsoft Word can keep track of. He met his wife, Alex, married her, and witnessed the birth of their daughter, Rosalie. He moved from Cincinnati to St. Louis to Columbus to Binghamton to New York City. He submitted Public Land over sixty times, receiving nine finalist or semifinalist nods before hearing he won the Anita Claire Scharf Award from the University of Tampa Press. It will be his first book.
“When I got the phone call, I was visiting my wife’s family in Florida,” Sumpter says, “Two dogs were playing outside in a lake, and I tried very hard to talk normally while jumping up and down.”
The Anita Claire Scharf Award is selected by the editors of Tampa Review from among the manuscripts submitted to its annual Tampa Review Prize for Poetry competition. Submissions for next year’s awards are now being accepted.
To be eligible, authors are asked to submit a previously unpublished booklength manuscript. There is a contest fee of $25, and each submitter receives a complimentary one-year subscription to Tampa Review. Entries must follow published guidelines and must be postmarked by December 31, 2016. All entries will be considered for both the Tampa Review Prize for Poetry and the Anita Claire Scharf Award.
Complete guidelines are available at www.ut.edu/tampareview or by sending a self-addressed, stamped envelope to The Tampa Review Prizes, University of Tampa Press, 401 West Kennedy Blvd., Tampa, FL 33606.
Posted by Tampa Review & Tampa Press at 12:02 PM No comments: 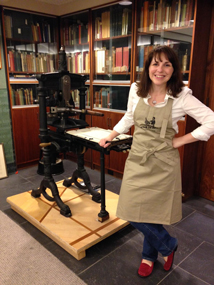 Amelia Fontanel, Associate Curator of the Cary Graphic Arts Collection at the Rochester Institute of Technology in Rochester, New York, is a letterpress printer herself, and she knows first-hand the thrills and chills of producing work on an iron handpress.

Knowing her experience and accomplishments, we are even more delighted to publish her comments on the latest Tampa Book Arts Studio limited-edition project, now available from the University of Tampa Press.

“The Rich Mouse is a bibliophile’s dream!

When marketeers tout the publication of a forgotten manuscript by some bygone author, we oft expect a trade edition, maybe in hardback, sometimes in e-ink, and a chance to enjoy a bit more of that writer’s brilliance. But when bibliophiles get involved in breathing new life into a lost text, the result can be so much more than words on paper: it can be a book worthy of appreciation on many levels—good content in concert with excellent production and presentation.

This is just what the team of historians, typographers, and printers at the Tampa Book Arts Studio has done to publish The Rich Mouse, a sweet parable left unpublished in 1950 by famed woodcut artist J. J. Lankes. Great care has gone into the typographic choices, paper selection and even, meticulous printing of the book on the iron handpress once owned by Mr. Lankes himself. The Rich Mouse in limited edition is a labor of love in revealing a new facet of Lankes’s creativity. Its companion Rich Mouse Compendium also gives the rationale and describes the effort spent to bring this important work to press by bibliophiles and for bibliophiles too!”

Posted by Tampa Review & Tampa Press at 11:24 AM No comments: