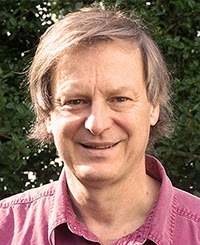 Tennessee writer John Bensko has been selected as winner of the second annual Anita Claire Scharf Award by the editors of Tampa Review. His new poetry manuscript, Visitations, will be published in Spring 2014 by the University of Tampa Press and the poet will be invited to read on the University of Tampa campus after the book is published next year.
The Anita Claire Scharf Award is given to support publication of a book of poetry submitted to the annual Tampa Review Prize competition that significantly exemplifies or explores the interrelatedness of visual and verbal art and the interconnectedness of global cultures. The award is named in honor of the founding editorial assistant, and later associate and contributing editor, of Tampa Review who helped define the aesthetic and global values that are part of the journal’s mission.
“This manuscript pushes beyond all kinds of borders,” said Richard Mathews, editor of Tampa Review, who worked with Scharf on the journal for more than seventeen years. “Anita always fostered thinking outside the box, and this prize manuscript pushes readers to enlarge their vision through imaginative leaps across time, space, and circumstance. And like Anita, Bensko has a special appreciation for the natural world, ecology, and visual art.

“The poems of Visitations clearly delight in nature images—blooming lilacs, Sweet William, bayberry, persimmon, and even hornets with their ‘papery nest.’ We are unmoored from time and place to explore what it means to be fully human. It might be to savor a continuous strand of Southern culture—sugar cane, tobacco leaf, eroded fields, and old barns. But Bensko’s poems are visitations to multiple times and places and bodies. He allows us to inhabit both sides of a war, to move from the Hudson River Valley to Mississippi, or to
draw our souls through sheep, oxen, and shark. ”

He has been a Fulbright Professor at the University of Alicante in Alicante, Spain; and he teaches a summer creative writing course there through the University of Memphis, where he is a full-time faculty member along with his wife, the fiction writer Cary Holladay.

“This manuscript shows remarkable craftsmanship and a sensitive ear for language,” Mathews adds. “The judges sensed the whole book coming together through metaphors from visual art near the end: ‘The brush along the canvas/leaves no more than a whisper. Still /the finished canvas must claim a voice.’ Bensko makes the universe into a canvas in the conclusion of this poem when he writes: ‘Above the leaves, heaven/cuts through
eyelids./It paints the body human/into the unseen gorges of the earth.‘ It’s a beautiful and stunning finish that Anita—and any reader—would applaud.”

The Anita Claire Scharf Award is selected by the editors of Tampa Review from among the manuscripts submitted to the annual prize competition. Submissions for next year’s awards are now being accepted.

To be eligible, authors are asked to submit a previously unpublished booklength manuscript. Judging is by the editors of Tampa Review, who are members of the faculty at the University of Tampa. There is a contest fee of $25, but each submitter receives a complimentary one-year subscription to Tampa Review. Entries must follow published guidelines and must be postmarked by December 31, 2013. All entries will be considered for both the Tampa Review Prize for Poetry and the Anita Claire Scharf Award.

Complete guidelines are available at www.ut.edu/tampareview or by sending a self-addressed,
stamped envelope to:

Congratulations to John Bensko! We're looking forward to the release of Visitations; watch for it in Spring 2014.

Posted by Tampa Review & Tampa Press at 10:02 AM No comments: