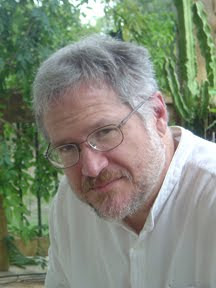 John Blair, born in St. Petersburg, Florida, has become the first Florida-born author to win the Tampa Review Prize for Poetry, which celebrates its first decade of awards this year. Blair, who now lives in San Marcos, Texas, received the tenth annual prize for his manuscript entitled The Occasions of Paradise. In addition to a $2,000 check, the award includes book publication in Spring 2012 by the University of Tampa Press.

Blair’s earlier poetry collection, The Green Girls, was the 2003 winner of the Lena-Miles Wever Todd Award from Pleiades Press, and his short story collection, American Standard, was the 2002 winner of the Drue Heinz Literature prize and was published by the University of Pittsburgh Press. He also has two novels from Ballantine/Del Rey, Bright Angel and A Landscape of Darkness.

Tampa Review judges commented that The Occasions of Paradise “lives up to its title with ample moments of near perfection, both in its individual poems and in the book as a whole.”
“The poems are filled with lyrical abundance. The cadences uplift and inspire,” the judges wrote. “Each poem is not only terrific on its own, but is skillfully placed and arranged to contribute to a perfectly satisfying collection. The sheer abundance of creative energy in this book—the beauty of poem after poem at once spontaneous and brilliantly constructed—mirrors the deft hand of a creator that inspires with awe, transports with beauty, and puzzles with questions.”

“I came across Blair's manuscript very early in the judging process,” poetry editor Erica Dawson explained. “The poems immediately arrested my attention. When I finally put it down, Occasions of Paradise stayed with me. . . . I simply could not, or, rather, did not want to get the stunning collection out of my head. I'm thrilled to have had a chance to read it, but even more thrilled it has a home with University of Tampa Press.”

Winner John Blair has previously published his poems and stories widely in magazines and journals including Poetry, The New York Quarterly, The Sewanee Review, The Antioch Review, New Letters, and elsewhere. He is on the faculty at Texas State University, where he teaches American Literature and directs the undergraduate creative writing program.

While he didn’t grow up in St. Petersburg, Blair did spend a good part of his childhood at his grandparents’ house “in the middle of a cow pasture” in Lake Wales, where his father was born and raised. All the stories in his Drue Heinz Prize collection, American Standard, are set in Florida, and he earned BA and MA degrees from Florida State University in Tallahassee before completing his PhD at Tulane. Winning the Tampa Review Prize is a little like coming home.

A selection of poems from The Occasions of Paradise will appear as a “sneak preview” in one of the next issues of Tampa Review, the award-winning hardback literary journal published by the University of Tampa Press.

Judges of the Tampa Review Prize for Poetry also identified “The Old Dominion” by Jennifer Key of Pembroke, North Carolina, as runner-up for the 2011 prize. In addition, they announced six finalists:
Bruce Bond of Denton, Texas, for “For the Lost Cathedral”;
J. Matthew Boyleston of Houston, Texas, for “Viewed from the Keel of a Canoe”;
Diane Mehta of Brooklyn, New York, for “Black Pepper”;
Joshua Robbins of Knoxville, Tennessee, for “Praise Nothing”;
Carrie Shipers of Lincoln, Nebraska, for “Family Resemblances”; and
Charles Wyatt of Nashville, Tennessee, for “Angel into the Earth.”
The Occasions of Paradise is scheduled for release in Spring 2012. A reading tour of Florida to celebrate its publication is planned for National Poetry Month in April 2012, sponsored by the Florida Literary Arts Coalition.

The Tampa Review Prize for Poetry is given annually for a previously unpublished booklength manuscript. Judging is by the editors of Tampa Review, who are members of the faculty at the University of Tampa. Submissions are now being accepted for 2012. Entries must follow published guidelines and must be postmarked by December 31, 2011.

Guidelines are available at http://tampareview.ut.edu or by sending a self-addressed, stamped envelope to The Tampa Review Prize for Poetry, University of Tampa Press, 401 West Kennedy Blvd., Tampa, FL 33606.
Posted by Tampa Review & Tampa Press at 10:34 AM No comments: