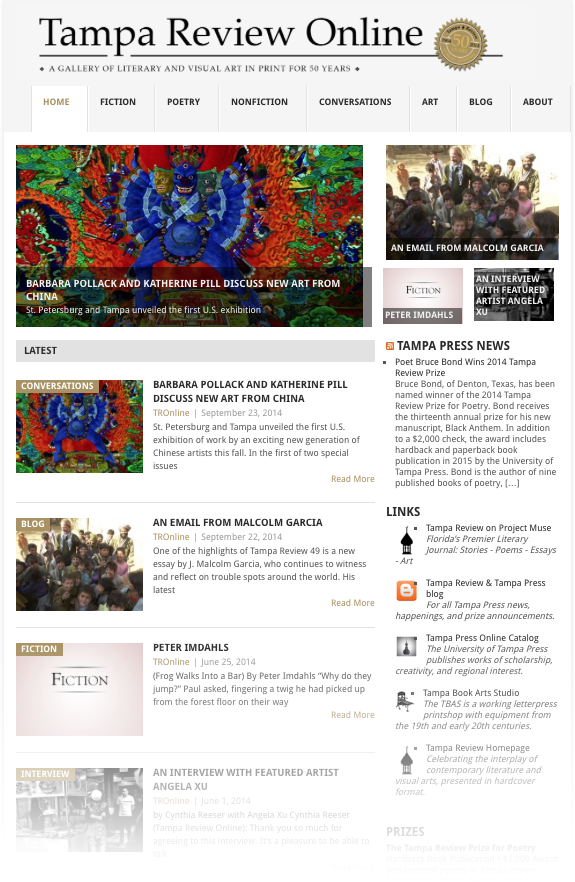 This year as Tampa Review celebrates fifty years of publication we’re naturally looking back over the last half-decade to savor milestones and accomplishments. But we’re also looking forward to the next fifty years!  We expect they will bring even more changes as new media continue to offer new forms of literary publishing. We know there will be even more changes ahead, but to along with our 50th anniversary issues, we have also launched a new look and location for Tampa Review Online.

Starting last fall, our sibling on the Web, Tampa Review Online, originally created and edited by graduate students in the low-res MFA in Creative Writing Program at the University of Tampa, has been more closely linked in staff and content to the print edition of Tampa Review. At the same time, we have joined the launch of Project Muse Commons, a shared space on the Web for content and comment in the context of other university presses and nonprofit publishers that make up Project MUSE. A Johns Hopkins University-based digital collection of over 550 scholarly journals, Project MUSE represents 160 university presses and academic publishers. It now makes digital editions of Tampa Review available to about 2,700 college and university libraries around the world that are Project MUSE subscribers, and with the addition of Tampa Review Online we are able to offer content that complements and extends our print edition.

TR Online currently includes an extended conversation about new art from China and the artists whose work appears in Tampa Review 49. Barbara Pollack, a New York-based independent curator and a leading expert on contemporary Chinese art, speaks with Katherine Pill, Assistant Curator of Art after 1950 at the Museum of Fine Arts, St. Petersburg. Together they explore many fascinating aspects of the Chinese art scene as they consider ways in which “the aesthetics of misinterpretation” play a role in international art.  Recent Tampa Review Prize poet Michael Hettich discusses one of the poems from his prize-winning manuscript that is featured in the latest issue, and there is a video link to Michael's reading of the poem. Also online, J. Malcolm Garcia, whose “My Middle Age” from Tampa Review 45/46  was named a “notable essay” in Best American Essays and who reflects on Syrian refugees in Tampa Review 49, has sent an email update about some of his current work.

Read the Project MUSE Commons announcement about the new site, and visit
TampaReview.musecommons.org

Posted by Tampa Review & Tampa Press at 2:45 PM No comments: 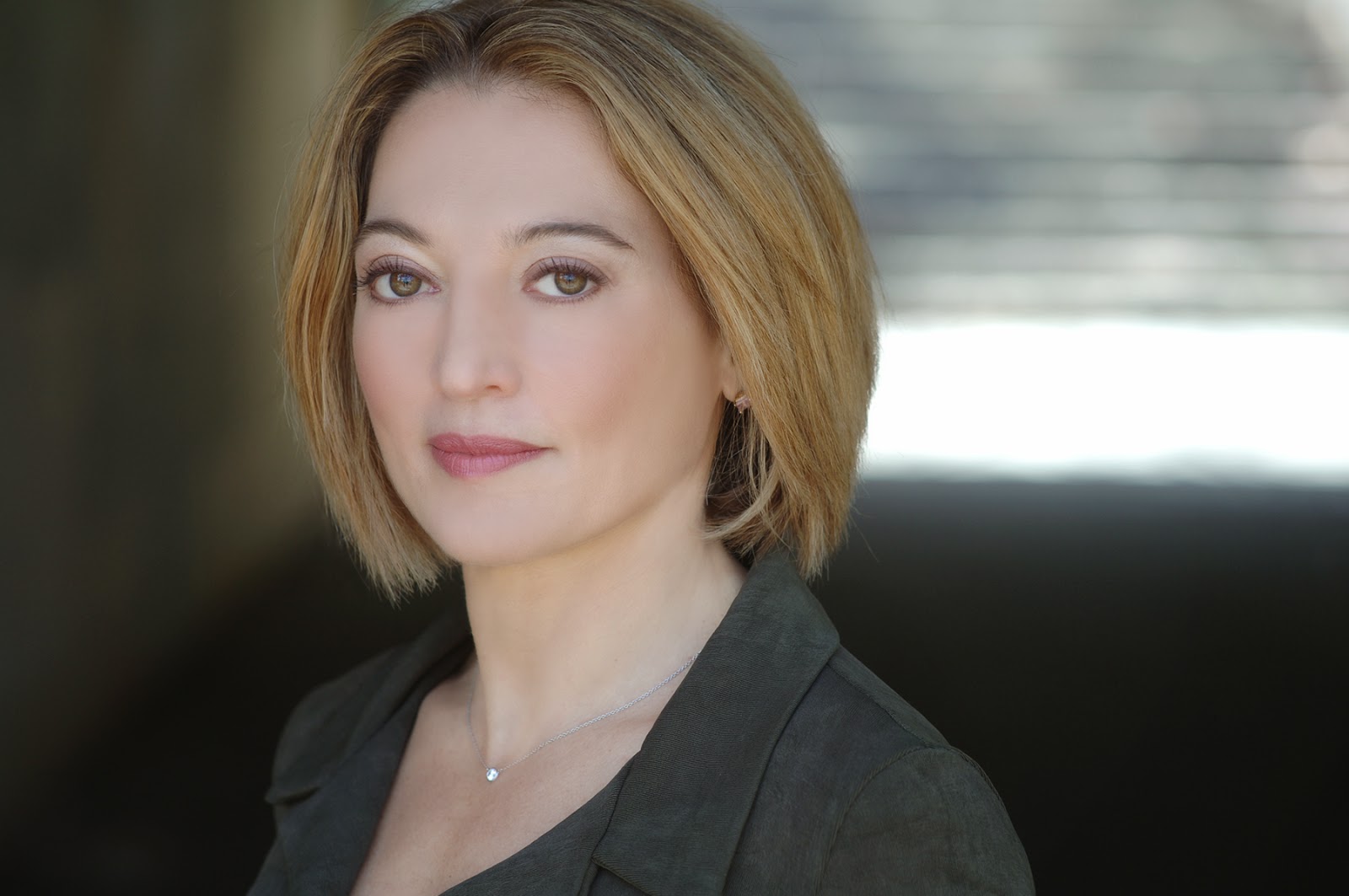 Paula Brancato of Long Island City, New York, has been selected as winner of the ninth annual Danahy Fiction Prize by the editors of Tampa Review. She will receive a cash award of $1,000 and her winning short story, “Executive Spa,” will be published in the forthcoming Fall/Winter issue of Tampa Review.
Brancato is a first-generation Sicilian-American writer with a business degree from Harvard and both Wall Street and Hollywood experiences informing her writing.
“‘Executive Spa’ is one of a series of stories from my novel-in-progress called Never Iron Naked, loosely based on my growing up in the 1970s in and around New York City,” Brancato explains. ”While the Bronx was burning, disco reigned, and entire buildings stood empty in the inner city, a new generation of women had begun to fight their way into power positions in the mainstream. We came from difficult, parochial backgrounds, where a college education was rarely more than a hope and a dream.”
Brancato is a graduate of Hunter College and the Los Angeles Film School. She also earned an MBA from Harvard, becoming one of the first women executives on Wall Street. She is also a filmmaker, music producer, and financial advisor working with hedge funds, family offices, and The World Bank, all of which have contributed to her unique voice.
“We learned to make our way in foreign territory bringing our cultures, beliefs and creativity with us and forever changing business, the sciences, and the arts, ”Brancato says. “If you recognize this story it is because this is what young men always do, but we really were the first generation of women who had the full liberty to do so, often against what our families and the men in our lives had to say about it. After all, the Ivy Leagues only began accepting women in the mid-’70s, weird as that may now seem.”
Brancato’s poems and stories have appeared in Mudfish, Bomb Magazine, Georgetown Review, Litchfield Review, Southern California Anthology, Ambit Magazine, and Georgia Review. She has received the Brushfire Poet Award, first prize from the Chester H. Jones Foundation, and the Robinson Jeffers Tor House Prize honorable mention.
She explains that her business experiences are part of her fiction, “But this is not what I was thinking when I wrote this story. What I was thinking about was the feel of ironing, the warmth, the soothing sensation of the cloth, the smells and tastes of home and home lost, because that’s what it takes if you are going to move forward into new territory. It takes leaving everything and everyone behind. So, I remembered myself, alone, 17, making my own way in a city in a culture that was simultaneously bursting with life and falling apart. In three days I would be homeless. I had sunk so low there was nothing else to lose—and then what? Then what is this story.”

* * *
This year the judges also named four outstanding finalists for the Danahy Prize:

* * *
The Danahy Fiction Prize was established by Paul and Georgia Danahy as an annual award for a previously unpublished work of short fiction judged by the editors of Tampa Review, the faculty-edited literary journal of the University of Tampa, published twice yearly in a distinctive hardback format. Subscriptions are $22 annually, and those received before August will begin with the issue featuring Brancato’s prize-winning story.
The Danahy Fiction Prize is open to both new and widely published writers, with an annual postmark deadline of November 1. The $20 entry fee includes a one-year subscription to Tampa Review, and all entries submitted are considered for publication.
Complete guidelines are available online or by sending a self-addressed, stamped envelope to The Danahy Fiction Prize, University of Tampa Press, 401 West Kennedy Blvd., Tampa, FL 33606.
Posted by Tampa Review & Tampa Press at 8:38 AM No comments: 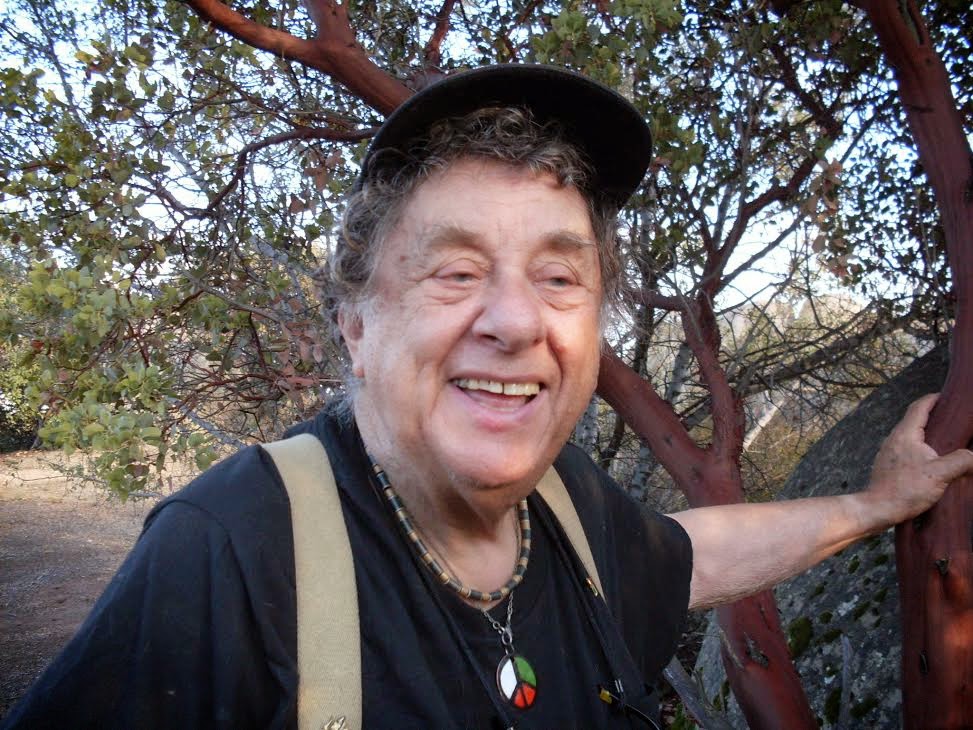 The editors and staff of Tampa Review and the University of Tampa Press mourn the loss of poet-editor-teacher Steve Kowit, 2006 winner of the Tampa Review Prize for Poetry for his collection The First Noble Truth and author of other books of poems, including Lurid Confessions, The Dumbbell Nebula, and The Gods of Rapture.  He also wrote the influential creative writing workshop text In the Palm of Your Hand: The Poet’s Portable Workshop.
Steve passed away in his sleep in the early hours of April 2, 2015, at his home in Potrero, California, on Coyote Holler Road, in the San Diego area, near the Mexican border.  We were in the process of editing page proofs for his forthcoming collection, Cherish: New and Selected Poems, which will be published later this year by the University of Tampa Press. He is survived by his wife, Mary, who will complete the editing of this final collection.
Tributes can be found on Steve’s Facebook page. He was a strong and vibrant force for poetry and a friend who will be deeply missed.

Posted by Tampa Review & Tampa Press at 9:16 PM No comments: