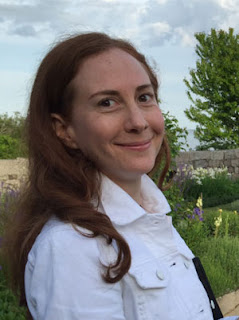 Anne Ray of Brooklyn, New York, has been selected as winner of the tenth annual Danahy Fiction Prize by the editors of Tampa Review. She will receive a cash award of $1,000 and her winning short story, “Please Repeat My Name,” will be published in a forthcoming issue of Tampa Review.
Ray grew up in suburban Maryland, graduated from the Creative Writing program at Carnegie Mellon University in Pittsburgh, and completed an MFA in fiction at Brooklyn College. She has worked as a waitress, a gardener, an English teacher, and a fish monger. Her work has appeared in many literary journals, including Gettysburg Review, Opium, LIT, Conduit, Gulf Coast, and Cut Ban. She was the winner of the 2014 StoryQuarterly fiction prize.
She is also the author of the libretto for “Symposium,” a ten-minute opera written in collaboration with composer Oliver Caplan, which was performed by the Juventas New Music Ensemble in 2011 as part of a series on new opera. She was a fellow at the MacDowell Colony and the Virginia Center for the Creative Arts, and works on the 18th floor of an office building in lower Manhattan.
Ray’s Danahy Fiction Prize story takes place in a situation familiar to many who have been called for jury duty, with the central character, Audrey, moving through various stages of the jury selection process.
Ray explains that the story was partially inspired by her own experience with jury duty. “One dreary and wet winter, I was selected to be on a jury for an armed robbery trial,” Ray says. ”I was juror number eight. Once I had lived through jury duty I felt that I had arrived at a setting for a story.”
Audrey is a character who appears in several of Ray’s stories. The author describes her as “a person overtaken by loneliness, and yet with an almost inexplicably persistent wish for beauty and hope . . . secretly giggling at her own private happiness.”
The Tampa Review editors who judged this year’s contest were especially impressed by the ways that Ray allowed the courtroom setting to introduce large and universal questions of values and judgment, while maintaining the close psychological focus on Audrey.
“It was strange to me, while I was sitting on the jury, how such a common—and specifically American—experience was so isolating,” Ray says. “The world of my desk job disintegrated; I was there and nowhere else. Putting Audrey in such a setting, with its absurdity and flatness, brought me pain; giving her a moment of tenderness in that same place brought me joy.”

This year the judges also named seven finalists for the Danahy Prize: “Central City" by Leslee Becker of Fort Collins, Colorado; “Garden for Loss” by Jan Bowman of Columbia, Maryland; “Rhino Girl” by Taylor Brown of Wilmington, North Carolina; “Emissary” by Abby Lipscomb of Fincastle, Virginia; “Phosphorous and Other Toxins” by Claire Luchette of Eugene, Oregon; “Accidental Camouflage” by Anthony J. Viola of Huntington, West Virginia; and “White Is for Compliant,” Megan Wildhood of Seattle, Washington.

The Danahy Fiction Prize was established by Paul and Georgia Danahy as an annual award for a previously unpublished work of short fiction judged by the editors of Tampa Review, the faculty-edited literary journal of the University of Tampa, published twice yearly in a distinctive hardback format. Subscriptions are $22 annually, and those received before September will include the issue featuring Ray’s prize-winning story.
The Danahy Fiction Prize is open to both new and widely published writers, with an annual postmark deadline of December 31. The $20 entry fee includes a one-year subscription to Tampa Review, and all entries submitted are considered for publication.

Complete guidelines are available on the Web at http://tampareview.ut.edu or by sending a self-addressed, stamped envelope to The Danahy Fiction Prize, University of Tampa Press, 401 West Kennedy Blvd., Tampa, FL 33606.
Posted by Tampa Review & Tampa Press at 12:16 PM No comments: