An appetite for regional cooking and a taste for local history will both find satisfaction in an appealing new cookbook from the University of Tampa Press.
From main courses like “Smoked Fish Pioneer Style” and “Hog Island BBQ Ribs” to sweet treats such as “Sea Foam,” and “Belleview Hotel Prune Whip,” the Caladesi Cookbook offers tempting recipes for seafood, salads, vegetables, breads, and desserts.

Read more »
Posted by Tampa Review & Tampa Press at 8:15 AM No comments:

Lights Out In Paradise // An Evening with John Blair 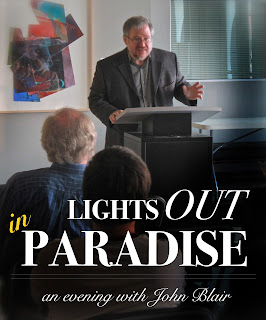 Last week during John Blair's Florida reading tour, celebrating National Poetry Month and the official release of his Tampa Review Prize poetry collection, The Occasions of Paradise, the Texas poet arrived at the University of Tampa's Scarfone/Hartley Gallery for his campus reading.

The stage was set amidst the gallery's striking current art exhibit and many eager fans and readers arrived early to grab a seat. And yet no sooner did the poet set foot on campus than the lights went out. (Reportedly due to a squirrel who fought his last fight with a power transformer down the block). It was quite a scene as emergency measures took over, and like a plot device out of The Thomas Crown Affair, all the museum doors magnetically began to close with a loud release of their latches – sealing the room in darkness.

And yet the night of poetry went on. Propping open the emergency doors, all attendees pitched in to move the seats from inside the gallery to the early-evening-lit vestibule outside its doors. John Blair, with Kindle in-hand, read from his prize-winning collection with the charm, passion, and wit found in his books — stopping often for asides or annotations and to tell some of the many stories which helped to shape these poems.

This was the final reading in the annual Writers at the University series, sponsored by the Department of English and Writing in the College of Arts and Letters in collaboration with the Florida Literary Arts Coalition. The series, free and open to the public, will resume with the start of the Fall 2012 academic year.


Posted by Tampa Review & Tampa Press at 8:15 AM No comments: