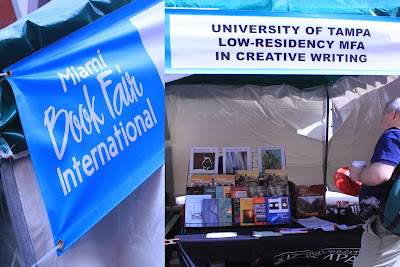 IT WAS A LONG, RAINY WEEKEND in Miami and all of the South Florida “book people,” or at least people who would call themselves book people, had come to take part in the annual Miami Book Fair International. The event consisted of several closed-off streets where vendors, publishers, book collectors, and authors could set up along the way in their respective and colorful tarp-covered booths. When it was not raining there were several high-profile author readings and discussions going on throughout the day, as well as hours upon hours of getting lost in the books on display, which were everywhere along the fair route. And if you were lucky enough, you might have gotten lost in a little local music for a brief moment of sunshine, which was coming from a live orchestra in the open-food court, or gotten your hands on a fresh Arepa, grilled so much at just the right temperature that you might look forward to going back next year.

We braved the majority of the three days responsively wrapping and unwrapping our handout materials and merchandise in thin protective plastic sheeting, as the sky haphazardly opened and closed its mighty floodgates. At one point three men were needed to each hold down a corner of the tent to keep it from flying away. Glad to say, barely a book was injured though. So you see, it was a wild weekend in Miami, but not in the sense that Miami is normally reported about. It was wild like a storm in the pages of Oz — and for a group of book people, that was as fitting an experience as we could've ever hoped to have.

Typography Has a New Home at Tampa 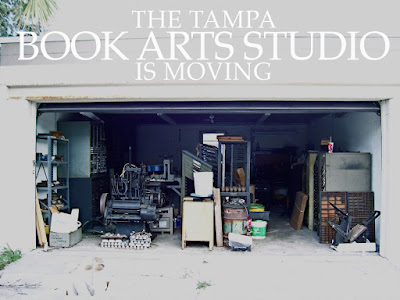 EXPECTED TO BE READY THIS JANUARY for the start of the first residency of UT’s new Low-Res MFA in Creative Writing program, The Tampa Book Arts Studio (TBAS) has begun the transition to its new home on campus in the Edison Building, across the street from the Art Department studios and the Scarfone-Hartley Gallery. Transplanting the Book Arts Studio will be the result of several tedious months of planning between the University of Tampa, Dr. Richard Mathews, and Letterpress Coordinator Carl Mario Nudi.

For more information about the Books Arts Studio and for the latest about the move, please continue reading here.

Posted by Tampa Review & Tampa Press at 8:43 AM No comments: