A Gift of Art for Tampa Review 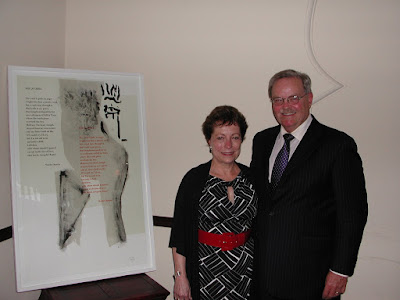 Carol and Terry Parssinen joined the editors of Tampa Review at UT’s Plant Hall Conference Room on Friday, October 24, to make a special presentation. Carol recently retired as Senior Vice President of the Center for Innovation in Science Learning at the Franklin Institute in Philadelphia. She also worked in Philadelphia for many years with the American Poetry Review, retiring as chair of its Board of Directors, and it was this significant poetic and literary connection that prompted her presentation of a splendid American Poetry Review limited-edition lithograph.

Carol and Terry presented the editors with a five-color lithographic print, one of only 100 signed and numbered copies, of "The Quarrel" which brings together the poem of that title by Stanley Kunitz, former U.S. Poet Laureate, with the art of Robert Motherwell, one of the leading lights the New York School of American abstract expressionisism.

Carol, who holds a PhD in English and American literature from Brandeis University and has taught at Grinnell College, Grinnell-in-London, Temple University, and the University of Pennsylvania Graduate School of Education, now resides in Tampa. Terry is a professor of history at the University of Tampa and a widely published author of scholarly and popular publications, including The Oster Conspiracy of 1938: The Unknown Story of the Military Plot to Kill Hitler. Their generous support cements a literary and historic connection to the City of Brotherly Love.

The afternoon was filled with lively conversation. The handsome lithograph now proudly hangs in the office of Tampa Review.
Posted by Tampa Review & Tampa Press at 12:56 PM 1 comment:

Tampa Review Prize poet Steve Kowit will be featured on Garrison Keillor’s THE WRITER'S ALMANAC, to be broadcast nationally on National Public Radio on August 19.

Keillor will read Kowit's poem "Memorial Day" from his TR Prize book, THE FIRST NOBLE TRUTH. It will be available as a podcast on the NPR site:

Another poem from Steve's book, "Will Boland and I," is being recorded and digitally broadcast by Lighthouse for the Blind as part of their service to the blind and visually impaired.

TR Prize-winner Sarah Maclay had a poem from her latest UT Press book, THE WHITE BRIDE, selected as poem of the month for August by Verse Daily. "Anne B to Henry 8" can be found through the Verse Daily "Web Monthly" links at the bottom of the page at:

Sarah was also a recent reader on a podcast for World Wide Word Radio Network's "The Moe Green Poetry Hour," where she shared the hour with Stephanie Brown and Rick Hilles. Podcasts are archived at:

http://www.blogtalk radio.com/ onword/
Posted by Tampa Review & Tampa Press at 11:37 AM No comments: 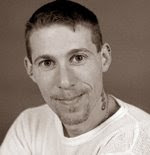 Poet Benjamin S. Grossberg of Clayton, Ohio, has won the 2008 Tampa Review Prize for Poetry. He receives a $1,000 cash award and book publication by the University of Tampa Press for his winning manuscript, Sweet Core Orchard. His book will be released simultaneously in hardback and quality paperback editions in early 2009.

Grossberg, who taught creative writing and English poetry for the past eight years at Antioch College, until its closing this summer, is a self-confessed apple-lover. He planted his own small orchard—mostly Granny Smiths—at his home in Ohio, calling it “Sweet Core Orchard,” a name that became the title of what will now be his prize-winning second book of poetry.
This summer Grossberg will have to leave his orchard, carrying with him his prize-winning book title and the hope to plant again in the future. With Antioch College now closed, he is moving from Ohio to Hartford, Connecticut, where he will be starting in the fall as an assistant professor teaching creative writing and poetry at the University of Hartford.

His first book, Underwater Lengths in a Single Breath, winner of the 2005 Snyder Prize, was published by Ashland Poetry Press in 2007, receiving high praise from poets and critics including Richard Howard, who wrote, “I rejoice that these poems are in the world of American letters.” Grossberg’s poems have also appeared widely in literary journals, including Paris Review, Southwest Review, North American Review, and in The Pushcart Book of Poetry: The Best Poems from the First 30 Years of the Pushcart Prize. His chapbook, The Auctioneer Bangs his Gavel, was published by Kent State in 2006.

Tampa Review judges praised Grossberg’s book for its “compelling affirmation of the longer poem” in a manuscript impressive for “brilliant lyrical and thematic arcs, rich use of archetype and symbol, and heartening honesty.”

“Grossberg leads us through gorgeous rhapsodies recalling livestock auctions, cornfields, sex parties, and family rooms,” the judges wrote. “We are neither overly indulged nor left wandering without a host. . . . We leave satisfied and dazzled.”

A selection of poems from the forthcoming book will appear as a “sneak preview” in the fall/winter issue of Tampa Review, the award-winning hardback literary journal published by the University of Tampa Press. His book is scheduled for release in early 2009.

Judges of the Tampa Review Prize for Poetry also identified fourteen finalists for the 2008 prize. They are:

Harry Bauld of New York, New York, for “Somebody Else’s Tune”;
Earl Sherman Braggs of Chattanooga, Tennessee, for “Younger Than Neil”;
Joanne Childers of Gainesville, Florida, for “Kumquats”;
Ruth Moon Kempher of St. Augustine, Florida, for “Times Ago, Gone Dreaming”;
Frannie Lindsay of Belmont, Massachusetts, for “Brushing My Father’s Hair”;
James McKean of Iowa City, Iowa, for “We Are the Bus”;
Erika Meitner of Blacksburg, Virginia, for “The Contact Notes”;
Mark Neely of Muncie, Indiana, for “Dogs of Indiana”;
William Orem of Waltham, Massachusetts, for “Our Purpose in Speaking”;
Jonathan B. Rice of Richmond, Virginia, for “The Forgetting Body”;
Don Schofield of Thessaloniki, Greece, for “Before Kodachrome”;
Jay Udall of Reno, Nevada, for “The Welcome Table”;
Jeanine Walker of Houston, Texas, for “Water Beneath the Foundation”; and
Linda Stern Zisquit of Jerusalem, Israel, for “Porous.”

The Tampa Review Prize for Poetry is given annually for a previously unpublished booklength manuscript. Submissions are now being accepted for 2009. Entries must follow published guidelines and must be postmarked by December 31, 2008.
Guidelines are available at http://tampareview.ut.edu or by sending a self-addressed, stamped envelope to The Tampa Review Prize for Poetry, University of Tampa Press, 401 West Kennedy Blvd., Tampa, FL 33606.
Posted by Tampa Review & Tampa Press at 10:38 AM No comments: 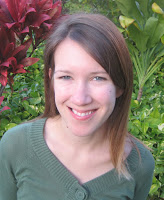 California writer Kelly Luce has been awarded the second annual Danahy Fiction Prize by the editors of Tampa Review. She will receive a cash award of $1,000 and her winning story, “Ms. Yamada’s Toaster,” will be printed in the forthcoming issue, Tampa Review 36.

Luce is a widely published author whose fiction has previously appeared in The Gettysburg Review, Fourteen Hills, New Ohio Review, Nimrod, and Alimentum, and can be found online at Common Ties and Review Americana. She was a finalist for the Indiana Review’s Fiction Prize in 2006. Originally from Chicago, she currently works as a nanny in Silicon Valley, California, and lives in the Santa Cruz mountains. She previously worked in Japan for two years—one year teaching public junior high English and a year directing a children’s immersion program.

Some of the characters and motifs in her story—with an inventive plot featuring a toaster that predicts the future and references to American and Japanese pop culture—derive from that experience, including the title character. “Though I never encountered a psychic appliance while living there,” Luce says, “I did have an English conversation student who was a partial inspiration for Ms. Yamada.”

The Danahy Fiction Prize was established by Paul and Georgia Danahy as an annual award for a previously unpublished work of short fiction judged by the editors of Tampa Review.
This year the judges also named five outstanding finalists:

Tampa Review is the faculty-edited literary journal of the University of Tampa and is published twice yearly in a distinctive hardback format. Subscriptions are $22 annually, and those received before August 1, 2008, will include the issue featuring Luce’s prize-winning story. Subscribe online at http://utpress.ut.edu.


The Danahy Fiction Prize is open to both new and widely published writers, and the contest has an annual postmark deadline of November 1. The $15 entry fee includes a one-year subscription, and all entries submitted are considered for publication.


Complete guidelines are available on the Web at http://tampareview.ut.edu or by sending a self-addressed, stamped envelope to The Danahy Fiction Prize, University of Tampa Press, 401 West Kennedy Blvd., Tampa, FL 33606.
Posted by Tampa Review & Tampa Press at 10:09 PM 3 comments: