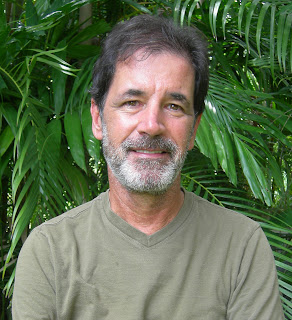 Michael Hettich, of Miami, Florida, has been named winner of the 2013 Tampa Review Prize for Poetry. Hettich receives the twelfth annual prize for his new manuscript, Systems of Vanishing. In addition to a $2,000 check, the award includes hardback and paperback book publication in Spring 2014 by the University of Tampa Press.
Hettich was born and raised in New York City and its suburbs. He has lived in upstate New York, Colorado, northern Florida, Vermont, and Miami, where he presently resides with his wife, Colleen. His previous books of poetry include Like Happiness (Anhinga Press, 2010) and The Animals Beyond Us (New Rivers Press, 2011). His most recent chapbook, The Measured Breathing, won the 2011 Swan Scythe Chapbook Contest.
Tampa Review judges commented that the poems in Systems of Vanishing “take startling imaginative leaps, leaving the familiar world transformed.”
“This is no simple vanishing act, but something truly magical,” the judges said. “Hettich works with readily accessible language and images that seem familiar, but through lush metaphor and hypnotic music,  he makes new realities spring to life in tropical abundance.
“His flights of magical realism can start from practically nothing. One poem begins with ‘a ladder propped against the air’ and follows a girl who climbs up, looks higher into the stars, and keeps on ‘climbing/through the constellations and off across the dark/where no one could find her forever.‘ These poems lead us toward new constellations of meaning and leave us there, awed and amazed by the journey.”
Hettich’s poems have appeared in numerous journals, including Orion, Poetry East, Alaska Quarterly Review, Prairie Schooner, TriQuarterly, Mudlark, and The Sun, as well as in many textbooks and anthologies, and he has collaborated widely with visual artists and musicians throughout Florida and nationally. He teaches at Miami Dade College.
A selection of poems from Systems of Vanishing will appear as a “sneak preview” in the next issue of Tampa Review, the award-winning hardback literary journal published by the University of Tampa Press.  Hettich’s book will be published during National Poetry Month in April 2014 and launched with a reading tour of Florida sponsored by the Florida Literary Arts Coalition.
The judges also announced twelve finalists this year:
Lavonne J. Adams of Wilmington, N.C., for “Small Wishes for Grown Women”;
Cory Brown of Rochester, New York, for “Out in the Deep”;
Sigman Byrd of Westminster, Colorado,  for “The Blue Heaven of Emptiness”;
William Greenway of Youngstown, Ohio for “Tripwires”;
Tom Hansen of Custer, South Dakota, for “Body of Water, Body of Fire”;
Julie Hanson of Cedar Rapids, Iowa, for “Charmed in What Regard”;
Brian Patrick Heston of Philadelphia, Pennsylvania, for “If You Find Yourself”;
Leonard Kress of Perrysburg, Ohio, for “Ransacking the Library”;
Teresa Leo of Lansdowne, Pennsylvania, for “Bloom in Reverse”;
Rose McLarney of Franklin, North Carolina, for “Its Day Being Gone”;
B. V. Olguín of San Antonio, Texas, for “Red Leather Gloves”;  and
Seth Brady Tucker of Lafayette, Colorado,  for “We Deserve the Gods We Ask For.”
Tampa Review Prize judges also chose a second winning manuscript for a new book publication prize, the Anita Claire Scharf Award.  The announcement of that winner will be forthcoming within a few weeks.
The Tampa Review Prize for Poetry is given annually for a previously unpublished booklength manuscript. Judging is by the editors of Tampa Review, who are members of the faculty at the University of Tampa. Submissions are now being accepted for 2014. Entries must follow published guidelines and must be postmarked by December 31, 2013.
Complete guidelines are available online