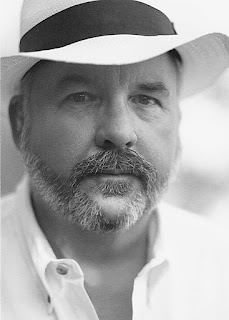 Poet Christopher Buckley of Lompoc, California, has won the 2009 Tampa Review Prize for Poetry. He receives a $2,000 cash award and book publication by the University of Tampa Press for his winning manuscript, Rolling the Bones. His book will be released simultaneously in hardback and quality paperback editions in early 2010.

Buckley is a widely published writer with several other major recent awards to his credit. He was a Guggenheim Fellow in Poetry for 2007-2008, and received the James Dickey Prize for 2008 from Five Points literary journal. He has also been the recipient of a Fulbright Award in Creative Writing to the former Yugoslavia, four Pushcart Prizes, two awards from the Poetry Society of America, and two NEA grants in poetry.

Tampa Review judges praised Rolling the Bones for its “local identity and global reach” in a manuscript “sensitive to political, economic, spiritual, and philosophical nuance.”

“Buckley offers thoughtful meditations on our part in a cosmic game in which a roll of the dice or the bones in California can rattle the foundations in Ecuador or Egypt," the judges wrote. “Buckley’s poems are dense with carefully observed details, heavy with rich images. Always evocative, sometimes surreal, Buckley renders even the most quotidian experience as something memorable, occasionally sublime.”

Judges of the Tampa Review Prize for Poetry also identified ten finalists for the 2009 prize. They are:

Buckley was raised in Santa Barbara, Calif., and educated at St. Mary’s College (BA), San Diego State University (MA), and the University of California Irvine (MFA). His most recent books of poetry are Modern History: Prose Poems 1987-2007 (Tupelo Press, 2008), Flying Backbone: The Georgia O’Keeffe Poems (Blue Light Press, 2008), and And the Sea (Sheep Meadow Press, 2006). His poetry has appeared in The New Yorker, Antaeus, American Poetry Review, The Hudson Review, The Nation, The Iowa Review, Gettysburg Review, Ploughshares, The Georgia Review, The Kenyon Review, The Southern Review, Crazyhorse, Seneca Review, The Sewanee Review, Quarterly West, New Letters, TriQuarterly, Prairie Schooner, FIELD, and POETRY. He is also the author of a dozen additional books of poetry, two collections of creative nonfiction, and several critical studies and anthologies. He is Professor in the Creative Writing Department at the University of California Riverside.

A selection of poems from Rolling the Bones will appear as a “sneak preview” in one of the next issues of Tampa Review, the award-winning hardback literary journal published by the University of Tampa Press. The book is scheduled for release in Spring 2010, and a reading tour of Florida to celebrate its publication is planned for National Poetry Month in April 2010, sponsored by the Florida Literary Arts Coalition.

The Tampa Review Prize for Poetry is given annually for a previously unpublished booklength manuscript. Judging is by the editors of Tampa Review, who are members of the faculty at the University of Tampa. Submissions are now being accepted for 2010. Entries must follow published guidelines and must be postmarked by December 31, 2009.

Posted by Tampa Review & Tampa Press at 9:50 AM No comments: 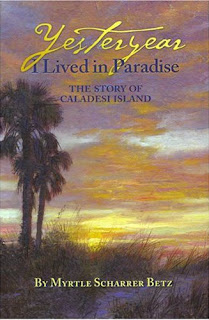 The author, sadly, is no longer with us, but her granddaughter Terry Fortner attended the awards ceremony, with her husband Bob, in West Palm Beach on May 15. Terry and her sister, Suzanne Thorp, worked closely with the staff of the UT Press to make this new and enlarged edition of the book a reality. This award recognizes all of their good work as much as it does Myrtle's own wonderful story of her life on Caladesi Island.
Posted by Tampa Review & Tampa Press at 9:43 AM No comments:

Snapshots from AWP 2009 in Chicago

UT Press and Tampa Review were on display at the 2009 AWP conference in Chicago. It was a hectic three days in the basement of the downtown Hilton. We hosted several author signings, each of which brought new and old friends around to our tables for good conversation, hugs, and smiles.

Here are some snapshots from that memorable weekend, briefly identified, from top to bottom: 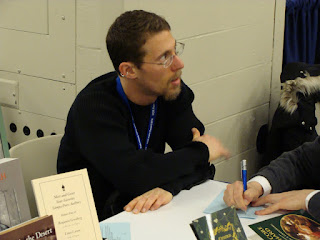 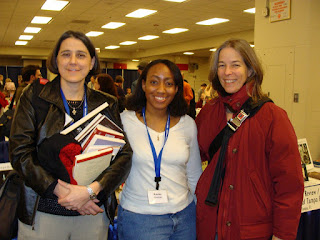 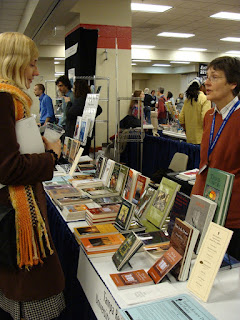 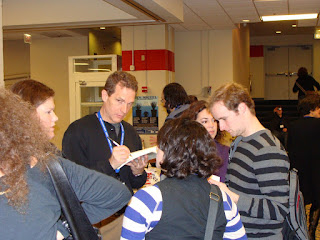 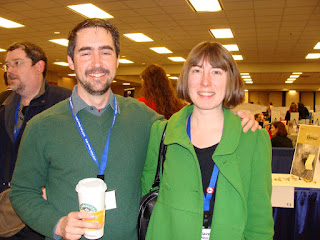 Posted by Tampa Review & Tampa Press at 11:39 AM No comments: