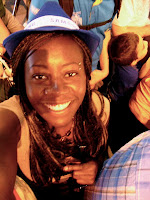 For the past year, fiction writer Julie Iromuanya has been one of the two fiction editors at Tampa Review and a judge for the Danahy Fiction Prize. She has also taught First Year Writing and creative writing courses here at the University of  Tampa.


Julie just completed her first novel, Mr. and Mrs. Doctor, and her short stories and excerpts from her novel have appeared or are forthcoming in The Kenyon Review, Passages North, The Cream City Review, and other journals. Before she slips away next year for an appointment at Northeastern Illinois University in Chicago—where she will have the opportunity to teach fully in her fields of creative writing/fiction and Africana literature—we want to introduce her to those of you who haven't had a chance to meet her.

Our questions for Julie caught up with her in the midst of a summer trip through Europe.

What are you doing right now?
Right now as I type I’m on a train from Paris to Madrid. I love trains, but not this particular one. We’re cramped in a stinky four-person sleeper cabin. It’s a little bit claustrophobic and the view is blinded by one of our many bags propped on the windowsill. But I think under this grime is a really good story. Trains are fascinating to me because we’re all strangers coming from and going to different places, but for one single frame in the story of our lives we’re in the same place and it happens to be such an intimate place.  In addition to that, one of the things that struck me during my travels were the various local demonstrations—marches, encampments, even festivals. I took some awful, blurry photos that I don’t think can really grasp the energy of these different movements so I think instead I’ll write a story.

Do you remember your first short story?
I really don’t remember my “first” short story. What I do remember is writing and typing up a lot of stories that involved green slime when I was a kid—and trying, unsuccessfully, to get them published. When I was about eight or nine I even sent one off to Putnam Press and Bantam Books. I wrote a cover letter telling them that my favorite writer was Ann M. Martin and I was in the third grade in Mrs. Cederholm’s class and that I had four siblings. Putnam Press swiftly rejected my efforts with a form letter explaining that they did not read “unsolicited works.” I still remember pulling out my dad’s giant red Merriam-Webster to find the definition of “unsolicited.” When I was in the fifth grade, I made my first venture into writing a longer work, a “novel” entitled Mathew’s Journey. I spent months writing this novel and every week Mrs. Gauthier would have the class sit in a circle so I could read them the latest chapter. I think about it now: What a great teacher to allow such a shy kid a few moments to share her work with her class. It’s strange that I devoted so much of that year to writing that novel—typing it too—and all I can remember now is that it was about a boy who encounters ghosts.

What was it like teaching in Tampa and editing the Tampa Review?
I love the diversity of the student body at UT. Sitting in my freshmen writing classes, I was surrounded by students from all over the globe—the Caribbean islands, Albania, Kenya, Eritrea, Puerto Rico, Morocco, Kuwait, Denmark, Sweden, India, to name a few. On several occasions I witnessed moments when students would stop to ask questions about other parts of the world and find peculiar commonalities. I still remember a Ukrainian student who recognized the African American slave era folk tales that we were studying as the very stories that his grandfather used to share with him when he was growing up in Ukraine.  That was pretty cool. With my creative writers, I really love the talent and interest they have for writing, literature, and even the culture of writing. The Open Mics, conferences, visiting writers series, and the student journal are all student initiated and I love that so many students identify, not just as students, but as writers, and I think that’s so important for developing writers.

What's the most important thing you try to get across when teaching or introducing a new student to writing fiction?
I think we need to read and revise constantly, but I also think it’s important for new writers to develop a thick skin. Rejections come with the work we do, but we still have to press on. I tell my classes this routinely. Then I usually remind them that our artist friends, the actors, get rejections right to their faces but we writers get a typewritten slip in the mail that politely declines our work; it could be worse.

Could you comment on the story behind your piece Only in America? It’s going to be published in the next issue of Tampa Review, and we accepted it long before we had met you—before we knew you would one day come to teach at the University of Tampa . . .
“Only in America” is taken from a couple chapters in my novel, Mr. and Mrs. Doctor. In this section, I set out to develop Job and Ifi, the married couple’s relationship through their child, Victor. Most of the main conflict and tension pivots around Victor. Job and Ifi are counterpointed. They have very different ideas about how they see America at this point in the novel and it’s acted out through the choices they make about how they’ll raise him. I think this is the story of many immigrant families in America—the choices that couples must make about their children because so much of their future is invested in them. The thing is, Victor’s a kid, so he senses the tension in his parents’ relationship but he doesn’t really understand why. So I thought it’d be interesting to tell parts of the narrative from his point of view to develop some interesting dramatic irony. And then he’s also a little bit spoiled and he’s a little bit of a tyrant, so he enjoys mischief. He’s a cyclone from the moment he is introduced in “Only in America.”

How much of your own cultural background was used or reflected in that story?
Coming from an immigrant family—my parents are Nigerian immigrants—I understand some of the questions that immigrants have to ask themselves as they settle into a new land. In terms of the small, tangible details of the story, I remember developing this fascination with artifacts of Americana during garage sale season, just going through piles and piles of kitsch and leafing through this junk in search of a prize. Some of those objects that Victor discovers—the snow globes, the skates, the abacus—are things that I remember from such hunts. I think of an immigrant in some ways as having the same sort of childish fascination with the stories such objects tell about the new culture. I don’t know if people still go to garage sales as much as they did in the eighties, but it was an event. So the immigrant feels out of place at the garage sale, fully immersed in the new culture, but in terms of imagining the world of the immigrants, I tried to place them at the gatherings where immigrants feel the most at home and I remember from growing up that the moments when immigrant voices were the loudest happened to be at big cultural celebrations (birthdays, for example) and pickup games of soccer in the middle of the summer. Although it’s not so much the case with Americans, soccer has a funny way of uniting the various immigrants.


As fiction editor of TR what are some of things that you looked for in the fiction that you accepted?
When reading fiction for TR, I’m firstly looking for a story that says something new, but not just that. I’m really pulled in by stories that have an energy, a writer that tells the story in a way that challenges the reader in some ways—maybe it’s a moral dilemma or question or a formal choice. And when I finish reading, the flavor of the story needs to linger whether it’s a haunting story or a very satisfying story.

What's your favorite word?
Every time I watch Inside the Actor’s Studio I’ve tried to imagine how I’d answer a question like this, and I’m never satisfied with my answer. How about this instead: the word that makes me giggle is “ludicrous.” I remember sitting in a freshman Western Civ class and we were in the midst of discussing some weighty issue like cultural relativism and my professor responded to a student’s question by saying, “That’s ludicrous!” and the meathead football player who had been nodding off until that moment suddenly snapped to attention and yelled, “Hey, I know that rapper!” Ha!

What are you working on next?
I think I’ll be working on a short piece about a sleeper train or maybe something about demonstrators.