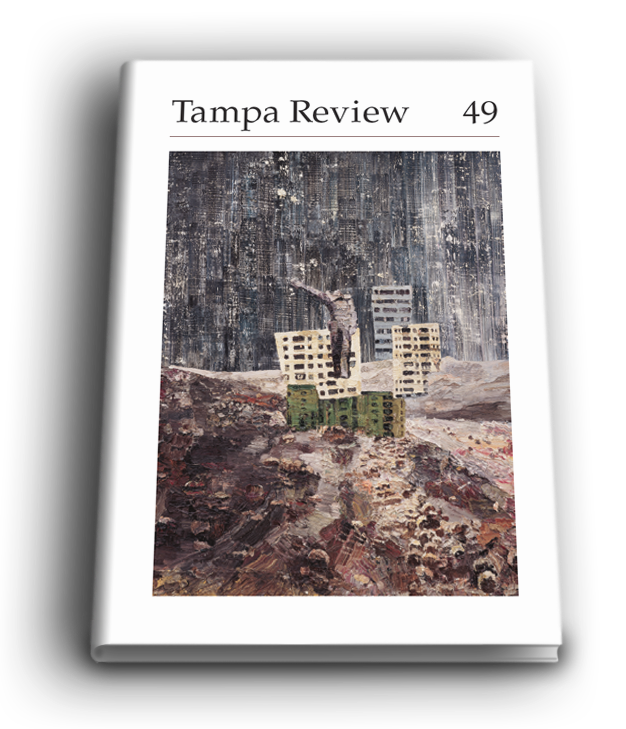 Announcing the release of Tampa Review 49

TR49 is the first of two issues this year that will
celebrate a milestone—50 years of literary publishing.

We are pleased to begin our fiftieth year by featuring selections from a unique and wholly new exhibition entitled, My Generation: Young Chinese Artists. The exhibition showcases a new generation of world-class Chinese artists who have emerged in China since 2000—all born after Mao’s death in 1976, marking the end of China’s Cultural Revolution. The exhibition is a collaboration between the Museum of Fine Arts, St. Petersburg, and the Tampa Museum of Art, and offers stunning visual evidence that Florida is fully engaged in global cultural dialog. The show runs here June 7-September 28, 2014, before traveling to Oklahoma City Museum of Art, where it will be on view October 25, 2014-January 18, 2015. The works speak for themselves while bridging the country and spanning the globe.
The literary contents of TR49 reflect a new generation’s struggle with “Utopia”—as Qui Xiaofei visually depicts on the cover. Poet Zeina Hashem Beck also expresses it in her opening poem as she personifies a world “trying to tip over its pain.” Daniel Gabriel describes a utopian interlude in his 2009 visit to “Syria Before It All Went South.” By contrast, Malcolm Garcia struggles to find grounds for faith amidst horror and ruin in “Praying in Reyhanli.”
Less destructive but deeply troubling is the singing war started by Mrs. Mudd in Jill Birdsall’s “The Beer Garden,” where experiences that promise harmony become discordant when inflected by greed, ego, and nationalism. Poet Michael Hettich takes a higher view in “Certain Constellations,” in which attentiveness to the natural world affirms the possibility of harmony if “we might move into/the circle of its song.”
The issue concludes with struggles from our more recent past portrayed in Vincent Czyz’s “Straightsville,” set in the 1980s, mostly at a gay rally in Manhattan. The story’s narrator experiences a series of mutual misreadings that blur the cultural divide between New York and New Jersey, gay and straight, work week and weekend. Czyz’s story suggests, as does the speaker of Knute Skinner ’s poem “What I Have Assembled,” that selves are multiple, that they can be torn apart and reassembled in diverse ways, and that people and generations may be more alike than different.
Finally, this first issue of our 50th anniversary year includes a few pages reproduced from the very first issue of Tampa Poetry Review in 1964.  They remind us how both our distant and recent pasts contain the cultural heritage and visionary struggles that create each new version of “my generation.”

We have come a long way from our earliest mimeograph edition to our present hardcover format, and both of our issues this academic year will include a little taste of the journey through the past, while continuing to showcase some of the best contemporary writing and visual art from Florida and the world.

Posted by Tampa Review & Tampa Press at 10:01 AM No comments: